As part of my Open Source course at Seneca College me and my colleagues collaborated with our small note taking projects so we could experience how the open source community works before delving into major projects.

For this course this project is called Release 0.1, which involved collaboration with 2 different projects fixes as follow.

This web note taking app was already fully functional but its editable text area lacked a clear outline indicating where the users should type their notes. My fixes were added with a CSS file addition. The text area had an id so it made my changes easy to apply.

My pull request is located on the following link https://github.com/robertbegna/my-note/pull/7

This web note taking app was already fully functional but I liked the idea to have a few buttons so users could save whenever they wanted or clear the contents of the notepad. For this feature I added Bootstrap to the project to work well with the layout and used the already nice looking Paper CSS from the existing app for the buttons.

My pull request is located on the following link https://github.com/a8a9a16/whiteboard/pull/4 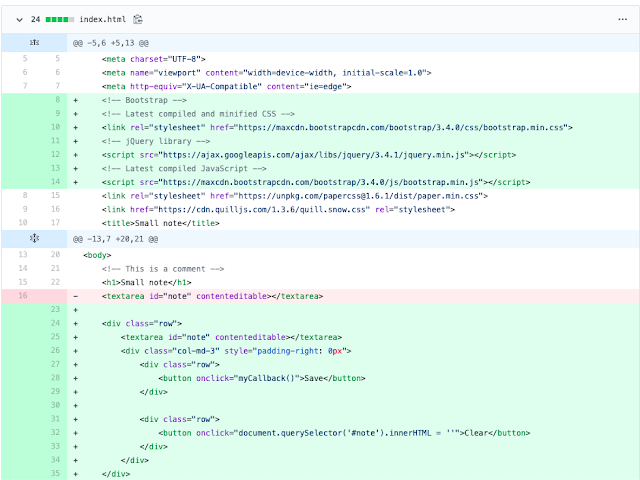 I really enjoyed this Open Source experience with GitHub, it taught me a lot on how to work with GitHub while collaborating with other user's projects.

Popular posts from this blog

September 12, 2019
Whiteboard - Note what you want with simplicity Whiteboard is a lightweight web app used to take notes, as many you might have seen around, but Whiteboard comes with no complicated features or menus, you just have to type whatever your note is and save it, that's it.

How is Whiteboard built? Whitebord is a jQuery web application that uses Filer.js to load and save the note file to storage and Bootstrap for its minimalistic UI layout with panels.
Why Whiteboard? Whiteboard has been created as part of a set of lab activities for my open source class at Seneca and it is published on github on the following links:
https://github.com/brucremo/whiteboard - GitHub repo
https://brucremo.github.io/whiteboard/ - Hosted version

September 27, 2019
As part of my Open Source course at Seneca College I am participating in this year's Hacktoberfest, "Hacktoberfest is a month-long celebration of open source software run by DigitalOcean and DEV.
Hacktoberfest is open to everyone in our global community.To participate, four pull requests must be submitted to public GitHub repositories.You can sign up anytime between October 1 and October 31." One of my main goals for this course is to delve into the Open Source community and improve my C# / .NET skills, so I have chosen the following projects to work on:

Winforms Winforms is a great tool that helps developers to build Windows-based UI's easily. "Windows Forms also provides one of the most productive ways to create desktop applications based on the visual designer provided in Visual Studio. It enables drag-and-drop of visual controls and other similar functionality that make it easy to build desktop applications."